This quarter seems to be the biggest yet in book adaptations! Although July is quite sparse, August and September more than makes up for the lack of movies. There are some exciting releases this quarter adapted from popular fiction!

Ant Man and The Wasp

Based on: Marvel Comics

Synopsis: As Scott Lang balances being both a Super Hero and a father, Hope van Dyne and Dr. Hank Pym present an urgent new mission that finds the Ant-Man fighting alongside The Wasp to uncover secrets from their past.

Based on: The Darkest Minds by Alexandra Bracken

Synopsis: Imprisoned by an adult world that now fears everyone under 18, a group of teens form a resistance group to fight back and reclaim control of their future.

To All the Boys I’ve Loved Before

Based on: To All the Boys I’ve Loved Before by Jenny Han

Synopsis: A teenage girl’s secret love letters are exposed and wreak havoc on her love life.

Based on: Juliet, Naked by Nick Hornby

Synopsis: Juliet, Naked is the story of Annie (the long-suffering girlfriend of Duncan) and her unlikely transatlantic romance with once revered, now faded, singer-songwriter, Tucker Crowe, who also happens to be the subject of Duncan’s musical obsession.

Based on: The Little Stranger by Sarah Waters

Synopsis: The Little Stranger tells the story of Dr. Faraday, the son of a housemaid, who has built a life of quiet respectability as a country doctor. During the long hot summer of 1948, he is called to a patient at Hundreds Hall, where his mother once worked. The Hall has been home to the Ayres family for more than two centuries. But it is now in decline and its inhabitants – mother, son and daughter – are haunted by something more ominous than a dying way of life. When he takes on his new patient, Faraday has no idea how closely, and how disturbingly, the family’s story is about to become entwined with his own.

Based on: Meg by Steve Allen

Synopsis: After escaping an attack by what he claims was a 70-foot shark, Jonas Taylor must confront his fears to save those trapped in a sunken submersible.

A Prayer Before Dawn

Based on: A Prayer Before Dawn by Billy Moore

Synopsis: The true story of an English boxer incarcerated in one of Thailand’s most notorious prisons as he fights in Muay Thai tournaments to earn his freedom.

Based on: Crazy Rich Asians by Kevin Kwan

Synopsis: This contemporary romantic comedy, based on a global bestseller, follows native New Yorker Rachel Chu to Singapore to meet her boyfriend’s family.

Inspired by: The Little Mermaid by Hans Christian Anderson’s

Synopsis: A young reporter and his niece discover a beautiful and enchanting creature they believe to be the real little mermaid.

Down a Dark Hall

Based on: Down a Dark Hall by Lois Duncan

Synopsis: Kit Gordy, a new student at the exclusive Blackwood Boarding School, confronts the institution’s supernatural occurrences and dark powers of its headmistress. 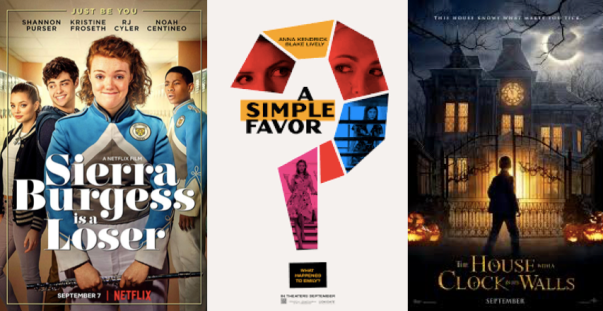 Based on: LAbyrinth by Randall Sullivan

Synopsis: The murders of Tupac Shakur and Notorious BIG spark an investigation.

Sierra Burgess Is a Loser

Synopsis: A case of mistaken identity results in unexpected romance when the most popular girl in high school and the biggest loser must come together to win over their crushes.

Based on: Cold Skin by Albert Sánchez

Synopsis: In 1914, a young man arrives at a remote island near the Antarctic Circle to take the post of weather observer only to find himself trapped in a watchtower besieged by deadly creatures which live in hiding on the island.

Based on: A Simple Favor by Darcey Bell

Synopsis: A Simple Favor centers around Stephanie (Anna Kendrick), a mommy blogger who seeks to uncover the truth behind her best friend Emily’s (Blake Lively) sudden disappearance from their small town.

Based on: The Children Act by Ian McEwan

Synopsis: As her marriage to Jack flounders, eminent High Court judge Fiona Maye has a life-changing decision to make at work – should she force a teenage boy, Adam, to have the blood transfusion that will save his life? Her unorthodox visit to his hospital bedside has a profound impact on them both, stirring strong new emotions in the boy and long-buried feelings in her.

The House with a Clock in its Walls

Based on: The House with a Clock in its Walls by John Bellairs

Synopsis: A young orphan named Lewis Barnavelt aids his magical uncle in locating a clock with the power to bring about the end of the world.

Based on: Little Women by Louisa May Alcott

Synopsis: We follow the lives of four sisters – Meg, Jo, Beth, and Amy March – detailing their passage from childhood to womanhood. Despite harsh times, they cling to optimism, and as they mature, they face blossoming ambitions and relationships, as well as tragedy, while maintaining their unbreakable bond as sisters.

Aside from Ant-Man and The Wasp (which I’ve already seen and loved) I’m most looking forward to The Darkest Minds, Sierra Burgess Is a Loser, Down a Dark Hall and A Simple Favor. Also The Meg, slightly…

I’m particularly excited for Sierra Burgess because Barb from Stranger Things is front and centre. (I think she deserves it too!)

What are you excited for?