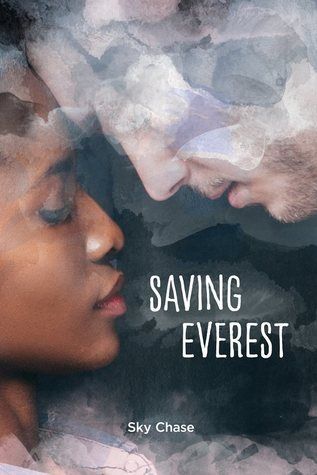 Everest is the most popular boy in school. He’s handsome, wealthy, and captain of the football team—he has the world at his fingertips, but he’s desperately unhappy. And when those feelings become too much to bear, he tries to take his own life.

On the surface, Beverly’s different from Everest in every possible way. She’s quiet, shy, hard working, and keeps to herself on campus, focusing on her schoolwork and her part-time job, distracting herself from her less-than-perfect upbringing.

When Everest returns to school after his attempt, he’s in more pain than ever. Discarded by his friends, he draws little empathy and too much attention from those who surround him. But when Beverly and Everest meet unexpectedly in a dusty corner of the old library, they discover together just how rich life can be when given the freedom to just be yourself.

This isn’t a hateful one star review, more so just a ‘this book really wasn’t for me’ one star kind of review. Netgalley really got me with that cover. And I really hate to say it, but the content inside didn’t feel reflective of the beautiful cover. I felt that Saving Everest had confusing characterizations, no real point of contention and was just juvenile in it’s execution.

I think the nicest thing I have to say about this book is that it reads like a good fan-fiction story would, fast-paced and accessible. Seriously, I am by no means a reader that starts a book and finishes it in a sitting, but I pretty much did so with this book. (Which is no surprise, as Wattpad is publishing this book.)

Despite that praise, I also think this book read a lot like some of the bad FF I used to read. I lived and breathed FF in my late teens, so I’m not stranger to it. I felt that Saving Everest wasn’t anything special or new, which I would largely pin down to the amateurish writing style.

There is also something that feels very dated about this story. Literally every character in Everest’s life – his parents and popular friends, want nothing to do with him after finding out about his suicide. And… I just don’t believe that in 2019? I’m sure there ARE people who treat people with mental health issues as ‘crazy’ or ‘weird’… but everyone in your life? Like even his own therapist seemed disinterested in his recovery.

Worse so, Everest’s suicide merely feels like a catalyst for Everest and Beverly to become friends. Upon finding out about Everest’s suicide attempt, he is isolated by his friend group and the rest of the school… except by the school’s loner – Beverly, who has basically been harbouring a crush on him for a while.

At the point in which the two MC’s become friends (which is in the beginning of the story), there is little to basically no discussions surrounding mental health for the rest of the story? Which is strange because the blurb positions this book as being ‘poignant’ and uh, I think it really missed the mark.

What this book really is – is a slice of life teen romance. At least that’s what it felt like to me. Whilst I’m sure the authors motive to advocate about mental health is legitimate, unfortunately this story wasn’t successful in doing so.