‘“I suppose I owe you the truth,” she said. “After all, I’ve come to ask for your help. But I warn you, this isn’t a tale for the faint of heart. It is a story of murder, and betrayal, and sisterly love turned sour.”
“So it’s a Tuesday,” said Sumi. “We can take it.”
Jack nodded. “As you say. It was, as it so often is, a dark and stormy night…”’ 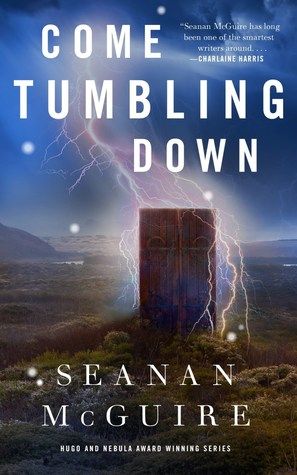 When Jack left Eleanor West’s School for Wayward Children she was carrying the body of her deliciously deranged sister–whom she had recently murdered in a fit of righteous justice–back to their home on the Moors.

But death in their adopted world isn’t always as permanent as it is here, and when Jack is herself carried back into the school, it becomes clear that something has happened to her. Something terrible. Something of which only the maddest of scientists could conceive. Something only her friends are equipped to help her overcome.

Eleanor West’s “No Quests” rule is about to be broken.

I didn’t anticipate writing a review for Come Tumbling Down, the fifth instalment in Seanan McGuire’s portal fantasy series. That’s not to insinuate I didn’t enjoy this book, or had nothing to say about it. I was just a bit lost for words when I finished this book.

However it’s been just a week since I put this book down and honestly my blood still rushes with excitement when I think about this book. Not only because I really enjoyed it (and it was my favourite instalment so far) but because I feel so excited about the future possibilities of where this series could go.

Come Tumbling Down is the continuation of Jack and Jill’s story from where we left them at the end of book two, Down Among the Sticks and Bones. Seanan McGuire continues to impress me with how her stories, usually companion in nature, all come together and form a cohesive narrative. And so begins this new quest, back to the horrid and dark world of the Moors.

The general consensus seems to be that people who really loved Jack and Jill’s story, tend to love this book and what is essentially their sequel, too. I have to agree with the sentiment. Down Among the Sticks and Bones has since been my favourite, until this book came along. I think this is largely because readers who loved the Moors get to revisit it, and explore even more about the world and the dark creatures that exist within it – like drowned gods and fish people.

Aside from the great world-building in this book, I was mostly excited by the characters and their dynamics. Jack, Christopher, Cora, Sumi and Kade are all completely different individuals that work so incredibly well together and it still baffles me. They might not always get along, but they work so well as a team. And although they might not be the same, they understand one another or at least try too. And honestly, it was all just really wholesome.

Although Jack has a special place in my heart, I think my favourite character in this story was actually Cora, despite not being the main character here. I did love how ruthless Jack was, how self-sufficient Sumi was and how loyal Christopher was, how imperfectly perfect Kade is as a hero… but Cora was just marginally my favourite even though I can objectively tell at times she was a bit annoying.

This is pretty unsurprising, because if you should know anything about me, it’s that I love my plus-size ladies in fiction. So I think it’s only natural I gravitated towards Cora, who is also a freaking mermaid.

‘This girl, though, this girl, with the ocean in her hair and the scales melting under her skin, she’d been vulnerable from the start.’

I mean… I can’t help that the way Cora is framed by everyone is so lyrical. It’s still refreshing to me see a plus size character being depicted as lovely or beautiful. Honestly, it’s like my kink at this point or something.

Whilst I loved this book and what is essentially a conclusion to Jack’s story and the Moors, it got me very excited about potential sequels. Namely something involving Kade and Cora, possibly something romantic at that.

‘“Wait,” he wheezed, the word half-swallowed by his gasped attempts to breathe. “Cora, wait.”
There was no way she could possibly have heard him. But she turned, and smiled, and it was the most beautiful expression he had ever seen. Heroes would have gone to war for that smile, would have died for even a shadow of its grace.’

Seanan McGuire was giving me teeny tiny breadcrumbs here. But that was all it took for me to seriously ship Kade and Cora, both of whom, are heroes in their own worlds. I think it would be a stretch to get to go to both their worlds in one book because they are so vastly different. But a girl can dream. (And also beg…) I do think Kade is due for his own adventure soon. The narrative really pushes that he will take over after Eleanor, but I always see reviewers wanting a story for Kade. And we might just get it if we keep asking! (Politely, of course.)

Have you read this book yet? What did you think of the latest instalment in this series?

4 thoughts on “BOOK REVIEW: COME TUMBLING DOWN BY SEANAN MCGUIRE”