Hello everyone, happy Monday! How are you? I have so many plans for the month of February, which involve prioritising some fantasy series that have been on my shelf for a while. And of course as it’s the month of looove I will be reading romance books, but really that’s no different from any other month really?!

I had no real ‘goals’ in January and mainly read an assortment of books from my TBR. I mostly managed to read those books so I’m pretty happy that I was able to cut some books from my TBR. But I’m definitely still in the habit of more adding books to my TBR throughout the month and favouring those new releases over backlist books.

I’ve themed February ‘fantasy February’ because apparently alliteration is what’s going to help me tackle all the fantasy series on my TBR. The three series I’ve decided on are all relatively short, as they’re only duologies/trilogies. I’ve already ordered the first books in all these series from my library. 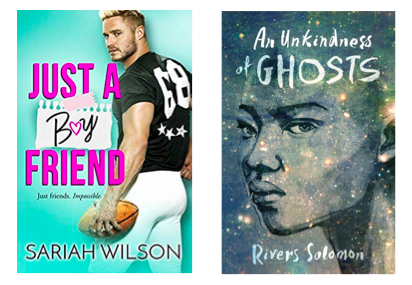 As always, because I never finish all the books I planned to read from the previous month, they’re rolling over to this month/ Just a Boyfriend is a book I need to read because I’ve had an e-arc from NetGalley for ages. I never found the perfect time to An Unkindness of Ghosts, but I think it fits perfectly with my theme this month!

The Cruel Prince by Holly Black
After reading ACOMAF last year, I’m ready for another delicious story centred around a High Court of Faeries. Especially if it involves a romance with a wicked faerie prince. 😈 Is it weird I’m already obsessed with Cardan before I’ve even read this series? (Probably.) But I just know he’s my a-hole type already.

The Abyss Surrounds Us by Emily Skrutskie
This duology has been on my tbr long enough, and it’s time I give it the attention it deserves! It’s an LGBT fantasy story centred around a family that raises genetically engineered beasts to defend ships as they cross pirate-infested waters. I’m ready for a whole lot of pirates, sea-monsters and a kick-ass anti-heroine.

The Bridge Kingdom by Danielle L. Jensen
A princess trained from childhood to be a lethal spy, sent as a bride under the guise of fulfilling a treaty of peace… sounds like my kind of fantasy. Especially if it has an enemies to lovers romance. 😍

Well Met by Jen DeLuca
Enemies to lovers who indulge in harmless flirtation as their characters in their local renaissance fair? All I’ve heard is great things about this debut, so I’m ready to swoon!
Buddy read with Alex from Reading by Starlight ✨

The Hating Game by Sally Thorne
Surprise, another enemies to lovers romance. This is also a workplace romance, which the is a trope I think I’m slowly coming to love. This book is so popular and I’ve put it off for the hype, but honestly I think I’m going to really enjoy it.

A Worthy Opponent by Katee Robert
I’m predictable at this point, because the third romance I plan to read this month is again… an enemies to lovers romance. I’m so excited for this wicked romance retelling of Tinkerbell and Captain Hook, especially since Tink is a plus size MC! Which is so hard to find in the romance genre.

Loveboat, Taipei by Abigal Hing Wen
Ever Wong’s parents send her from Ohio to Taiwan to study Mandarin for the summer, she finds herself thrust among the very over-achieving kids her parents have always wanted her to be. Unbeknownst to her parents, however, the program is actually an infamous teen meet-market nicknamed Loveboat, where the kids are more into clubbing than calligraphy and drinking snake-blood sake than touring sacred shrines. I’m slowly reading more YA Contemporaries again (only the ones that really make an impression on me) and this coming of age story about the struggle of first gen kids sounds like a lot of fun.

The One by John Marrs
I recently added this to my tbr after Booksandlala spoke about it on their Booktube channel and really enjoyed it. I’ve heard this thriller about matching peoples DNA to their perfect partner is really compelling. I’m also trying to read more thrillers this year and after hearing this book has a romance I thought it was ideal for February!

King of Scars by Leigh Bardugo
I’m so nervous for the next Grishaverse spin off following Nikolai because it has so many mixed reviews. However I’m hoping this story finally does Zoya justice! This book is my audio pick for the month. Having just finished the entire Grisha trilogy on audio last month, now feels like the perfect time to start this duology. I know this is a fantasy book, but it’s under the ‘other’ section because I’m listening to the audio and they’re always more of a relaxed read for me.

Have you read any of these books? I’d love to hear what you’re reading this month!