‘Once upon a time, there was a human girl stolen away by faeries, and because of that, she swore to destroy them.’ 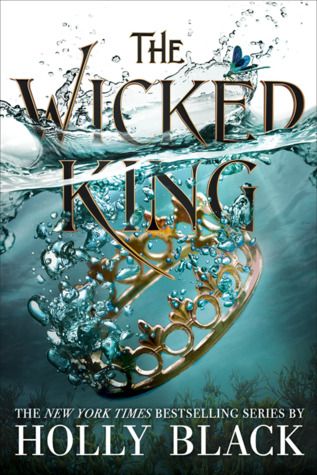 After the jaw-dropping revelation that Oak is the heir to Faerie, Jude must keep her younger brother safe. To do so, she has bound the wicked king, Cardan, to her, and made herself the power behind the throne. Navigating the constantly shifting political alliances of Faerie would be difficult enough if Cardan were easy to control. But he does everything in his power to humiliate and undermine her even as his fascination with her remains undiminished.

When it becomes all too clear that someone close to Jude means to betray her, threatening her own life and the lives of everyone she loves, Jude must uncover the traitor and fight her own complicated feelings for Cardan to maintain control as a mortal in a Faerie world.

If it were possible that books were delicious, I’d tell you this about The Wicked King: Jude’s ambition, her tormented romance with Cardan, the war she is waging with the Undersea and her fragmented relationship with her twin sister was all positively delectable to me.

I feel as though I’m so frequently disappointed by sequels. How often is it that you read a sequel that is on par, if not better, than its predecessor? That it continues to exhume an unhealthy amount of angst and (somehow) joy from you simultaneously. I feel I need to commend Holly Black on this, because I didn’t come out of this book crestfallen, and this book doesn’t fall prey to second book syndrome. It certainly rose above and sets high expectations for YA Fantasy’s to follow.

A half-year has nearly passed since the events of The Cruel Prince. Jude is no longer Madoc’s loyal daughter, dreaming of becoming a knight in the Faerie Court. She now stands by Cardan in one of the most honoured positions as his seneschal and most trusted advisor to the throne. A throne that she forced him onto to be her puppet king.

In my review of The Cruel Prince, I wrote that Jude’s vulnerabilities, ambiguous morals and growing ambition was what I found most enjoyable about it. The same can pretty much be said here. Jude is every bit vicious and cunning in this book, if not more actually. The scene where she finally confronts Locke about his betrayal from the first book… I nearly died of excitement. It had me cackling so much and was worth the wait. This line gives me literal chills every time I reread it:

“Maybe you thought I was too busy to take my revenge? Well, Locke, I want you to understand that for you, I will make time.”

I’ve never been a reader to actually care about politics in fantasy books, or at least very rarely do I care about politics in books. But Holly Black… her books just hit differently. But I think that’s largely driven by my love for Jude and her disposition for secrecy and deception. And the politics only become more interesting in this book, with Jude having to learn the hard way that power is easy to attain than it is to maintain. Jude and Cardan’s subtly sexy relationship probably has something to do with making the politics interesting for me as well. I loved that their political relationship means there’s more reason that these two get to be in proximity to one another.

Our eyes meet, and something dangerous sparks.
He hates you, I remind myself.
“Kiss me again,” he says, drunk and foolish. “Kiss me until I am sick of it.”

Whilst I never doubted that the people of Elfhame perceived Cardan as someone to be feared, I will admit that I completely under-estimated him as being politically viable without Jude. Some of my favourite scenes in this book had to do with Cardan, taking back some autonomy from Jude by assuming his role as a leader independently from her, showing her that perhaps he doesn’t need a puppeteer. Full disclosure, I found it absolutely sexy too.

When everyone mentioned plot twists in this book, I doubted that as well. Only because I find that I’m not often surprised in YA Fantasy anymore. But nope, not this time. Forgive me, Holly Black, for ever doubting you. (But honestly I kind of an apology for that fade to black scene 😈). This books ending just made it absolutely deserving of all the stars.

Have you read The Wicked King? Do you feel as passionately about it as I do? I’m kind of ridiculously obsessed with Cardan at this point and not even sorry.

3 thoughts on “BOOK REVIEW: THE WICKED KING BY HOLLY BLACK”