‘The bottom of the world is vicious. Merciless. Cold. It’s everything I need to become.’ 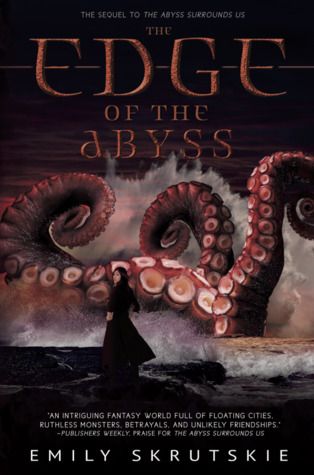 Three weeks have passed since Cassandra Leung pledged her allegiance to the ruthless pirate-queen Santa Elena and set free Bao, the sea monster Reckoner she’d been forced to train. The days as a pirate trainee are long and grueling, but it’s not the physical pain that Cas dreads most. It’s being forced to work with Swift, the pirate girl who broke her heart.

But Cas has even bigger problems when she discovers that Bao is not the only monster swimming free. Other Reckoners illegally sold to pirates have escaped their captors and are taking the NeoPacific by storm, attacking ships at random and ruining the ocean ecosystem. As a Reckoner trainer, Cas might be the only one who can stop them. But how can she take up arms against creatures she used to care for and protect?

Will Cas embrace the murky morals that life as a pirate brings or perish in the dark waters of the NeoPacific?

When I finished reading The Edge of the Abyss, I felt myself filled with conflicting emotions. Immediately, I was beyond satisfied with this sequel and felt it was a fitting ending to this duology. However my emotions were also tinged with a somber feeling, because Emily Skrutskie has written one of the most complex YA Fantasy stories that I have come to love so deeply.

See my review for the first book in this series, The Abyss Surrounds Us here on the blog.

It’s been three weeks since Cas gave her allegiance to the ruthless Pirate Queen Santa Elena and became an official crewmember of the Minnow. But there’s a new threat on the horizon, Hellbeasts, untrained Reckoner monsters that are bred to sink ships, who were discarded into the sea as young pups. These beasts are going to grow until they’ve devoured the entire ecosystem. When that happens, citizens on the floating cities will starve. But Cas is determined to save the ocean from these Hellbeasts and the crew of the Minnow won’t let her do it alone.

In my review of the first book, I wrote that I was desperate to see more types of beasts in this book. I am so thankful to say Emily Skrutskie doesn’t hold back. Not long into this book is the reader welcomed with some amazing Hellbeast action. I would say there’s considerably more action in this sequel than the last and it’s so welcome, because I think Emily Skrutskie did an amazing job at writing those tense scenes that had me on edge.

This book continues to prove that Emily Skrutskie is a master at writing complex young adult characters and relationships. Cas’ decision to sign her life away isn’t done lightly, but she hopes that Santa Elena is the kind of leader than can help sculpt her into the person she wants to be. This is genuinely one of my favourite series that perfectly captures this kind of anti-heroism and illustrates the consequences of a character leaving a life they know of comfort and privilege, for something greater than themselves.

However, signing her life away gives more power to Santa Elena than Cas realizes. A few months ago, Swift was Cas’ greatest enemy and now they’ve found themselves a part of a power game against one another created by Santa Elena. I am so predictable, but their romance was my favourite thing and it’s definitely my favourite Sapphic romance, like ever. If you thought the last book was tense and angtsy, just prepare yourself for this book. It’s also a tad more mature, but still not as explicit (as I’d like…) Also, I love a brooding Swift. Moody love interests are my sweet spot.

‘I may not love her yet. I may not deserve to have her love me back. But we’ve got oceans to cross. Beasts to hunt. Full lives to live. And I’m going to try.’

My only gripe with this book (aside from me being a pervert) is that I would’ve loved an index that had brief sketches of each monster species. Ichthyoid, Cephalopoid… these words just don’t help visualise anything! I’d love to see what the author visualises too.

This duology is a hidden gem in YA Fantasy. If you like fiction like Jurassic Park, or books like Into the Drowning Deep, with sapphic romances and complex female characters… you are sleeping on this book, because you’re its target audience.

Have you read this series? I’d love to hear what fantasy stories you are loving at the moment!

2 thoughts on “BOOK REVIEW: THE EDGE OF THE ABYSS BY EMILY SKRUTSKIE”