“You come from nothing, and it is to nothing you will return,” 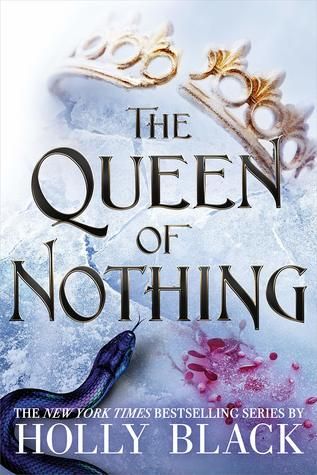 Power is much easier to acquire than it is to hold onto. Jude learned this lesson when she released her control over the wicked king, Cardan, in exchange for immeasurable power.

Now as the exiled mortal Queen of Faerie, Jude is powerless and left reeling from Cardan’s betrayal. She bides her time determined to reclaim everything he took from her. Opportunity arrives in the form of her deceptive twin sister, Taryn, whose mortal life is in peril.

Jude must risk venturing back into the treacherous Faerie Court, and confront her lingering feelings for Cardan, if she wishes to save her sister. But Elfhame is not as she left it. War is brewing. As Jude slips deep within enemy lines she becomes ensnared in the conflict’s bloody politics.

And, when a dormant yet powerful curse is unleashed, panic spreads throughout the land, forcing her to choose between her ambition and her humanity…

The Folk of the Air series has been a growing obsession of mine for the last month or so. I’ve been so consumed with Holly Black’s melancholic fae series, that when I finished reading this finale, I was left with a somber feeling that comes over me when I finish a particularly good series. Slowly I’m coming to the awareness that it’s over, and I won’t be joining Jude on any more deceptive (and occasionally violent) escapades that have been the highlight of my 2020 so far.

I also have reviews for book one The Cruel Prince and book two The Wicked King on the blog!

After Carden married Jude and effectively made her the High Queen of Elfhame, he just as quickly sent her into exile. Now, the new High Queen of Elfhame spends most of her mornings watching daytime television. (It’s actually kind of relatable?)  Homesick and ashamed, Jude can’t stop marvelling at the fact that her emotions got the better of her. Feeling like a fool in her exile, she manages to find a way back to Elfhame. Disguised as her twin sister she hatches a plan to figure out how Madoc means to take Cardan’s throne. In exchange for Madoc’s plans, she hopes Cardan would end her exile if she gives him the means to save Elfhame. Jude is still technically the Queen after all, and so Madoc isn’t just after Cardon’s throne, he’s after hers too.

“I am the Queen of Elfhame. Even though I am the queen in exile, I am still the queen. And that means Madoc isn’t just trying to take Cardan’s throne. He’s trying to take mine.”

The theme of vulnerability is permeated throughout this trilogy’s entire narrative, and I love that it’s come full circle in this final book. In my review of The Cruel Prince, I marvelled at Jude’s desire to assimilate with the fae, overcoming her trepidation that her mortality could hold her back from being their equal.

But Jude has more than proven herself as cunning and tactful as a courtier, and as violent and merciless as a redcap. Now, Jude needs to allow herself the luxury of experiencing the most intrinsic human emotion: love. Her armour has been up for so long that she almost doesn’t know how to be vulnerable with Cardan or even her sisters. But I loved watching her try, and learning that it just takes removing one piece at a time.

“Maybe it isn’t the worst thing to want to be loved, even if you’re not. Even if it hurts. Maybe being human isn’t always being weak. Maybe it was the shame that was the problem.”

With each book Holly Black seems to want to torture me that little bit more, because with each instalment these books have become increasingly steamier. I don’t mean to reduce these books to just the romance, but it is probably my favourite genre and so all the Cardan and Jude scenes in close proximity were very welcome. And I’d be lying if I didn’t say that I’d read a million more books about Cardan and Jude’s romance.

I can absolutely see why this final book has reviewers a bit divided. Was this as twisty and unexpected as the previous books? Maybe not. But personally this story suited my tastes as a reader very well because I’ve constantly asking for more romance from them. Seeing as I got that, I was more than satisfied. If anything, I maybe wanted more sisterly reconciliation between Jude and Taryn.

Despite the fact that I think three books was the perfect amount needed to tell Jude’s story, I’m still devastated this series over. Although I think this series is easily one of the best YA Fantasy’s out there, I also think it’s a fantastic place to start if you’re looking to jump into fantasy books. These books are so accessible, I can even see myself picking them up annually, rejoicing in Jude’s deceptive ways and the faerie politics of Elfhame.

What did you think about this finale? Were you as satisfied as I was, or looking for something a little more?

3 thoughts on “BOOK REVIEW: THE QUEEN OF NOTHING BY HOLLY BLACK”