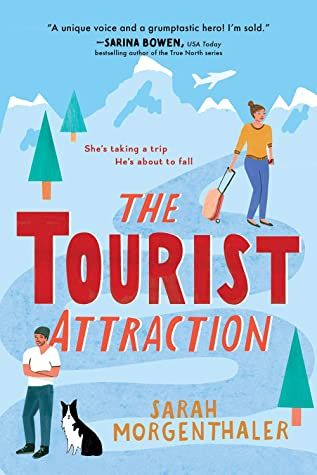 Graham Barnett has a notoriously bad attitude when it comes to the tourists of his town Moose Springs. When he opened his one-man diner, all he wanted was a job that payed the bills and to eat free cheeseburgers. He didn’t anticipate an unending influx of wealthy tourists. For the most part, his distaste towards tourists makes a lot of sense. The diner wasn’t Graham’s dream and it certainly wasn’t in his life plans. Outside of his diner, he’s still unsure about what he wants for himself.

Graham was pretty much the only selling point I needed to pick this story up. Give me all the Joshua Templeman’s 24/7, because I am such a sucker for a grumpy hero. Although there’s actually a considerable amount of reprieve from Graham’s grumpy attitude, because this guy really has a heart of gold. Despite his dislike for tourists, Graham can’t resist Zoey, the sweet bookworm who has dreamt of visiting Alaska for years. Her plain sweatshirts and bashful nature stand out to him in a sea of obnoxious and wealthy tourists and he just can’t help but be smitten with her. Graham is a really swoon-worthy hero, he is so sweet and charming towards Zoey from the moment he meets her and basically sweeps her off of her feet. He also has a blind dog that he treats like a child and dresses up. Nuff’ said about that, he’s perfect clearly.

“I’m surer about wanting you than I’ve ever been about anything. I’m just worried about what happens after.”

Zoey was a perfectly fine heroine. A large part of her characterisation was her normalcy, which I thought worked for her and against her in some regards. Against, because unfortunately she just paled in comparison to other heroines I’ve read recently. I still enjoyed her perspective nevertheless. I also think that she’s a character romance readers will easily be smitten with because she’s that shy bookworm character. Her perspectively is easily palatable too because she is just a good spirited character.

On the other hand, as I’m writing this review I’m actually coming to appreciate her normalcy because of its relatability. It’s nice to read about a character whose life has come to a standstill and who doesn’t have a fancy corporate job. Actually, both Graham and Zoey are characters in their 20s that are undecided about where their life is going next. It’s refreshing to read about characters who are ‘accomplished’ in ways we don’t usually see in romance.

“Did you ever have one of those jobs where you think ‘I’ll just do this for now, just to make ends meet?’ And then you look up, and it’s been ten years, and you’re still a waitress at the truck stop down the road from your grandmother’s place? But the tips are decent, and the people are nice, so you never leave?”

In the strangest way, that also maybe makes a lot of sense, this book vaguely reminded me of Well Played by Jen DeLuca. Largely because this book is set in a small Alaskan town and the small town vibes are really strong here. The setting itself is really more than just a backdrop and it plays a huge roll in the development of the characters relationship with one another.

The small gripe I have with this book is that most of the residents of Moose Springs share Graham’s distaste towards the tourists that populate their small town year round. Like Graham, their shared characterisation makes sense. However because of it, many of the side characters feel one note and like carbon copies of each other. The residents really seem to loathe anyone that comes through their town, even a tourist oohing and aahing at the beauty of your town is apparently eye-roll worthy? Luckily Graham’s charm is bountiful, so it makes up for how annoying I thought the animosity was sometimes.

This fluffy small town/vacation romance has something in common with many of the books I’ve read throughout Quarantine – It was a comforting and pleasant story that I could nestle into, it’s words like a warm blanket on my soul. Many of the clichés it has will easily resonate with romance readers and it’s guaranteed to find its audience. This was a great debut from Sarah Morgenthaler and I can’t wait to read the companion books in this series!

Have you heard of this book? What books are you reading at the moment?

3 thoughts on “ARC REVIEW: THE TOURIST ATTRACTION BY SARAH MORGENTHALER”