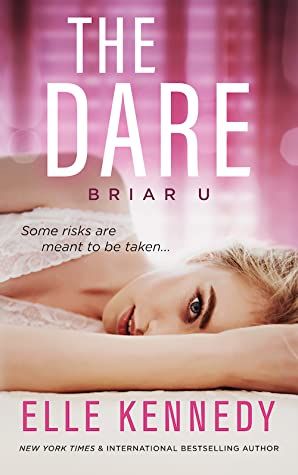 At the start of The Dare, we met Taylor as she’s struggling with being an outcast within her Kappa Chi sorority after an unfortunate dare led her to unknowingly hook up with one of her sisters boyfriends. Consequently Taylor deals with a lot of bullying, mostly by being fat shamed, and there’s also a bit of girl on girl hate going on within her sorority. At first I was really unsure about this. I find it semi-exhausting to read such prolonged girl on girl hate. The Chase dealt with similar issues so I felt that I could trust Elle to take care of this narrative. As the story progressed I became invested in seeing this plot through and was surprised by how it was addressed.

What surprised me the most was just how much I loved Conor. He’s sweet, charming and funny – a lot more than what I expected given he was portrayed as just your average California surfer guy in the previous book. When someone from his old life tracks him down, it triggers a deep seeded fear in him that he’ll never fit in with type of well-bred sons and daughters at Briar who come from old money.

I really enjoyed the dynamic between Taylor and Conor. Conor is soft-hearted for Taylor pretty quickly and it was so sweet. When she approaches him begging him to help her with a dare, he’s instantly protective and wants to show her bullies up with her immediately. He’s also happy to oblige because for once, someone isn’t treating him like a piece of meat.

Their fake one night stand soon morphs into a full-blown fake relationship. The lines between what’s real and fake blur pretty quickly and I loved watching them cross major relationship milestones. It’s pretty clear they’re smitten with each other, and this book felt like it landed perfectly between insta-love and slow burn. Not quite one or the other, but two people forming a genuine connection as friends while openly being attracted to each other and then falling in love.

Although, Conor and Taylor both come to this relationship with equal amounts of hang-ups. Conor’s ashamed of his past and is constantly waiting for Taylor to figure out that she’s too good for him. Whereas Taylor has deep-rooted insecurity issues with her body and can’t decide whether Conor genuinely finds her attractive. What I came to appreciate the most from this, was that their communication becomes really solid and they learn to healthy deal with their problems. I think throughout this series, that’s something I’ve noticed this author is exceptionally good at.

Okay friends, as far as the plus size rep goes… It wasn’t the best I’ve ever read. I definitely want to applaud Elle for trying, because ultimately I did enjoy this book. Truthfully it was only a couple of lines that undo a lot of the good work this book tries to do. I just would’ve loved to have spent more time with Taylor coming to enjoy being in her own skin. Her narrative was also tainted by orthorexic tendencies, which I might have a more favourable opinion about had it been addressed. Mainly I’m just unsatisfied that another plus size character in New Adult has an insecurity arc about their body. Also – look at that cover. You would NOT be able to tell that this book has a plus size heroine which is disappointing.

A lot of readers were making noise about how they were desperate for Conor’s book. If that was you, you won’t be disappointed. This book has so much charm I’m sure some of you will read it in a sitting. It does what I think a good romance book should do – makes your heart flutter and consumes you so much you can’t put it down. Despite having a bit of a tumultuous experience with this book, one thing is for sure, if Elle Kennedy keeps writing modern new adult romances I’ll keep reading.

Thank you so much for reading. Will you be reading this book? I’d love to hear what you think of Elle Kennedy’s Briar U series too!

5 thoughts on “ARC REVIEW: THE DARE BY ELLE KENNEDY”